Atlantic Reefmaker is an innovative artificial reef system, custom-designed and built for each project that protects the shoreline and enhances the underwater environment, reducing shoreline erosion caused by tidal energy and wave action without the negative impacts of traditional rock sills and jetties.

In addition to its wave attenuation function, there are huge ecosystem service benefits to the system. The discs can be embedded with oyster shell and embedded rock can be soaked in oyster spat before installation to promote oyster settlement.

The Reefmaker concept and structure redefines “living shorelines.” The system stabilizes the shoreline and marsh while enhancing the fish and shellfish habitat on and around the structure.

The benefits of using the Atlantic Reefmaker structure:

The Atlantic Reefmaker has been used in many projects off the North Carolina coast.

As part of the environmental permitting process for replacing the Bonner Bridge over Oregon Inlet in Dare County, the North Carolina Department of Transportation (NCDOT) agreed to mitigate for submerged aquatic vegetation (SAV) by installing the Atlantic Reefmaker (ARM), a wave attenuation structure. The ARM structure is designed to provide a wave shadow by allowing the existing beds of patchy SAV to coalesce. The structure also encourages colonization of barnacles, oysters and other sessile communities.

The Atlantic Reefmaker system allows for the implementation of a wave attenuating system without requiring the excessive footprint necessary for a rock sill on the seaward side of the structure. The system was selected because it can accommodate the horizontal limitations of installation in deeper waters without significantly impacting the benthic habitat within the nearshore area and reducing the overall footprint of the shoreline structure while still providing the necessary protection. Six sections of the Atlantic ReefMaker technology, with a length of 25 feet each, were placed along the outer shoreline of White Point in 4 feet of water. Each unit in these sections consists of six individual concrete disks stacked on a 12” diameter composite fiberglass pile. 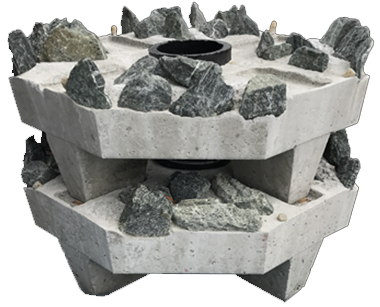 Our engineered marine ecosystem structure utilizes octagonally shaped concrete ecodisks center-mounted on a composite fiberglass reinforced piling. The ecodisks are supported at a specified height on the piling by a composite fiberglass reinforced polymer bottom clamp which is attached to the piling by mechanical and adhesive connections. Marine Ecosystem structures are installed in rows at a predetermined water depth based on the application type. 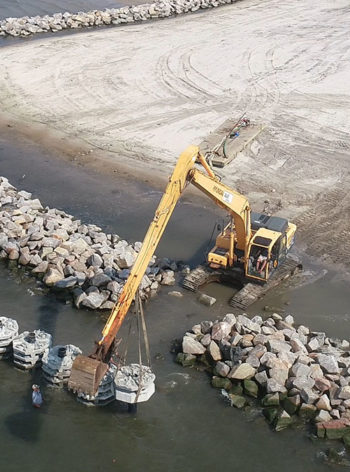 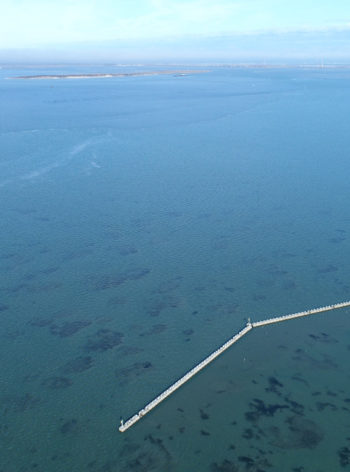 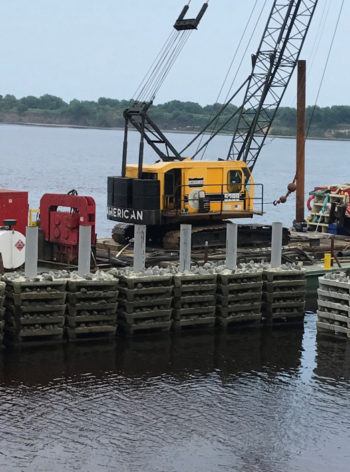